A zone is a virtualized OS which is created within a single instance of Solaris 10. Each environment has its own identification that is separate from the primary hardware. Each environment works independently as if running on its own system, making consolidation simple, safe, and secure. In this article, we will discuss about the Solaris Zones/container in detail.
whenever we go to the new topic, there are 3 questions will raise, what ? why ? and how? let we can find the answers...

Key Points :-
• Depends on our hardware capability we can create the non-global zones up to 8191.
• Each zone has an ID assigned by system when it's booted with the global zone, always listed as zone ID 0.
• Only the global zone contains a bootable Solaris kernel and is aware of all devices, file systems, zones. 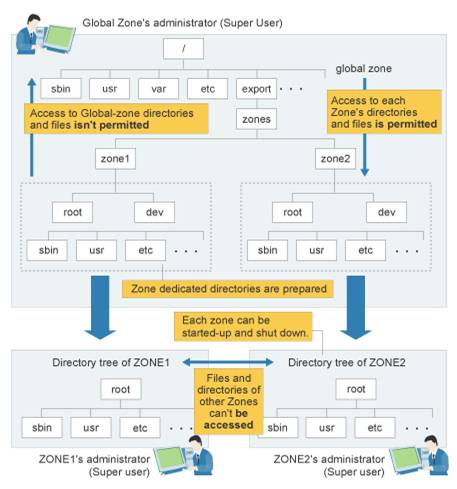 • Contain a complete copy of the Solaris binaries that are installed in the global zone
• Approximately its required 3 GB space for creating this type of zones.

Branded Zone
• Supports different versions of Solaris OS. For example, you can install Solaris 8 or  9 in a branded zone.

As shown in below image we can understand the flow of zone states clearly. 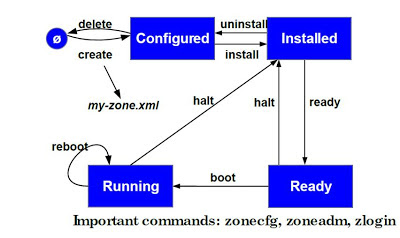 Zone Daemons  There are 2 Daemons associated with Zone.

Zoneadmd
• Zoneadmd daemon starts whenever zones requires to be managed.
• Each zones have single instance of Zoneadmd ( ie zoneadmd -z zonename)
• Its started automatically by SMF and its stop automatically when no longer required.
• Allocates the zone ID and starts the zsched process
• Sets system-wide resource controls
• Plumbs the virtual network interface
• Mounts any loopback or conventional file systems

Zsched
• The zsched process is started by zoneadmd.
• The zsched job is to keep the track of kernel threads running within the zone.
• It is also known as the zone scheduler.

To continue to read this article please go through the below link to get the more details about configuring  Zone and adding the resources and more and more....
http://www.unixrock.com/2013/06/complete-reference-of-solaris-zones_27.html
Thank you for reading this article. Please leave your valuable comments !!!!!!
Posted by Raj at 13:20