Raj
on 10:33
No Comment
Whenever we get into the new version of the Operating System, our intention would be the new feature which is available on latest release. In this post, we are going to discuss about the new feature of Solaris 11.
In Solaris 11 having many more features than Solaris 10. For our better understanding, we will go through  the new features one by one in briefly. 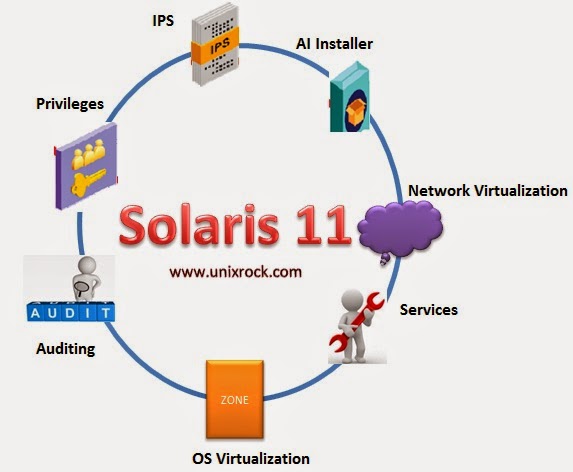 Few of main features on Solaris 11:-

Image packaging system which is main feature in Oracle Solaris 11, Its a network based package management (Repositories) and it provides complete software administration such as installation, upgrade and removal of Packages in easiest way.
AI (Automated Installer)

Automated Installer which is also one of the main feature in Oracle Solaris 11. Jump start feature has been completely redesigned as Automated Installer which can be performed as hand-free installation methods. Automated Installer (AI) is network-based feature which will resolves package dependencies and also provides flexibility.
Network
Especially network changes is one of the main concern in Solaris 11. Significant development in network side when we comparing with Solaris 10. Solaris 11 comes with profile-based network configurations which contains manual (Fixed Network configuration profile - NCP) and Automatic (reactive-Network Configuration profile - NCP) modes. Also introduced Network Auto-Magic (NWAM) features.
Boot Environments

Live Upgrade concept comes with new features as called as Boot Environment in Oracle Solaris 11. Multiple boot environments can be maintained on a system. "beadm" utility which help us to administrate the Boot Environments.
ZFS

Please continue to reading this post to get the step by step configuring and troubleshoots methods of Solaris 11 features.

Thanks for reading this post, please leave your valuable comments and queries, I will get back to you at earliest.
Posted by Raj at 10:33