Last post (Beginner's VxVM for Solaris - Part 1) we learnt about the components of the VxVM. In this post we are going to see brief about VxVM Volume Layouts RAID0, RAID1, RAID0+1, RAID1+0, RAID5 and its advantage/ disadvantages. Data in virtual objects is organized to create volumes by using the following layout methods:


Concatenation and Spanning :
Concatenation maps data in a linear manner onto one or more subdisks in a plex. To access all of the data in a concatenated plex sequentially, data is first accessed in the first subdisk from beginning to end. Data is then accessed in the remaining subdisks sequentially from beginning to end, until the end of the last subdisk.Main goal for implementing this technique is to create a virtual disk that is larger than one physical disk device. Concatenation also enables us to grow a virtual disk by concatenating additional physical disk devices to it. 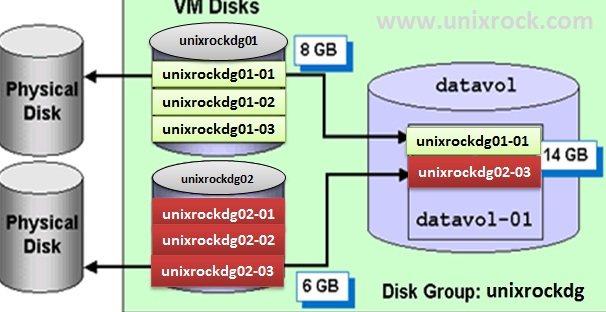 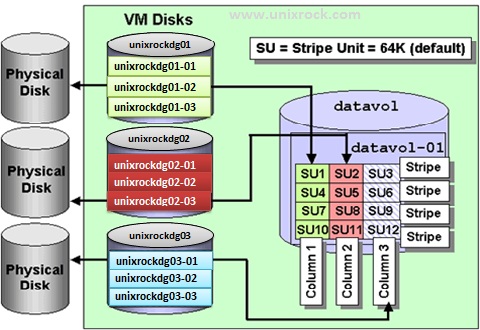 Mirroring uses multiple mirrors (plexes) to duplicate the information contained in a volume. In the event of a physical disk failure, the plex on the failed disk becomes unavailable, but the system continues to operate using the unaffected mirrors. Note: Although a volume can have a single plex, at least two plexes are required to provide redundancy of data. Each of these plexes must contain disk space from different disks to achieve redundancy. 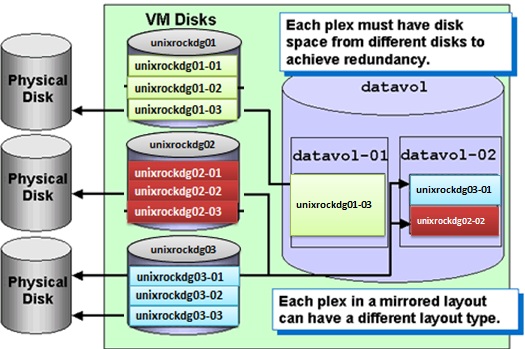 A RAID-5 volume layout has the same attributes as a striped plex, but includes one additional column of data that is used for parity. Parity provides redundancy. Parity is a calculated value used to reconstruct data after a failure. RAID-5 volumes keep a copy of the data and calculated parity in a plex that is striped across multiple disks. Parity is spread equally across disks.The default stripe unit size for a RAID-5 volume is 32 sectors (16K). 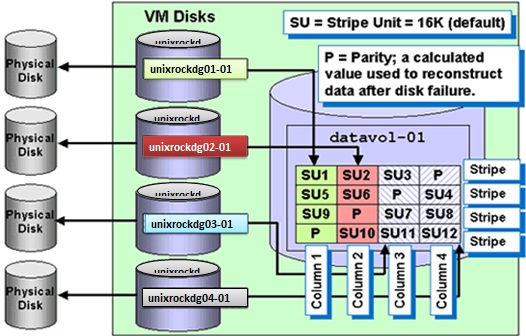 Thanks for choosing UnixRock. Requesting you to continue to reading the nex post which will describe the procedure of  installation for VxVM packages on Solaris system.
Posted by Raj at 13:45